Self-defense as an ethical act of the highest order 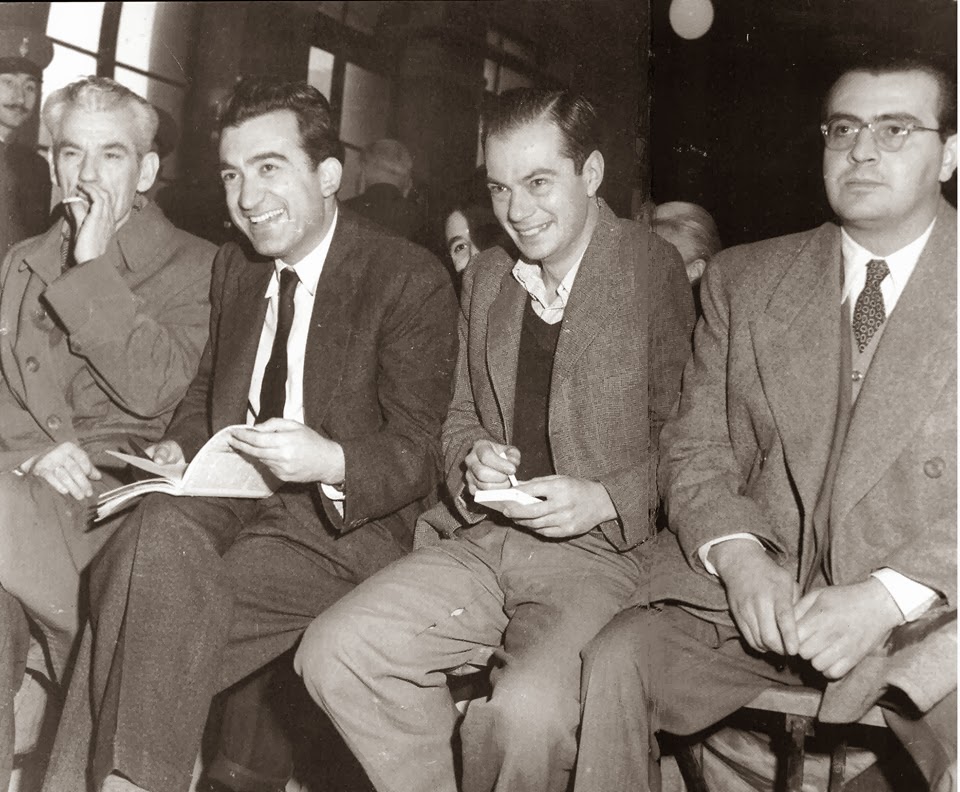 Sometime ago, a comrade--an unemployed construction worker who lives in one of the poorest refugee homes near the border with the occupied part of Cyprus--asked me what I thought people like Nikos Belogiannis (pictured laughing during his trial, second to the left) thought and felt as they faced the firing squad. "What was it that allowed them to face self-sacrifice of the highest order with a smile?", he asked me. He wasn't looking for an answer; he said he wanted me to think about the question myself.

I thought about the question on and off, for some time now. And when I tried to think about it I realized I had to reject some of the easiest answers, the ones very often reproduced in the media and in "public opinion" about men and women like Nikos Belogiannis. The media, when it doesn't slander communists, likes to portray them as latter-day saints, who were capable of self-sacrifice because they held an incredibly idealistic belief in the salvation of the class, and so saw themselves as its anointed martyrs. But Belogiannis, and the vast majority of those who underwent torture, imprisonment and execution, were atheists and materialists. They did not believe in any afterlife, and they did not believe they would be "recompensed" in some spiritual sense. Fotis Aggoules, a worker-poet of the 1930s who underwent prolonged imprisonment, put it succinctly: "Don't expect us to bend/for we have loved life too much." Resistance is not only not renunciation of earthly pleasure, it is lust for life.

Some vacuous left liberal writer, of the type the media mass produces as "geniuses" and experts, suggested that Belogiannis' stance can only be explained on the basis of the hypothesis that he was in love. One can hardly imagine a more trite and banal explanation; communism is rewritten as a cheap romance so that its most inscrutable subjective elements are dissolved into petty bourgeois chivalric fantasies. There are plenty of such attempts around, from what I gather (principal victim: Che Guevara), but they will never amount to anything else than pleasant bedtime reading for bored housewives.

All the greatest and most heroic exploits of the working class I can think of--the Paris Commune, the October Revolution, the Soviet resistance to fascism, Spanish Republicanism, the struggle of ELAS and the Democratic Army in Greece, the Cuban and Chinese revolutions--were acts of self-defense. Collective self-defense expressed in armed revolution and armed resistance.

When Marx and Engels speak about the Commune, when they speak about the people in arms, they are speaking about self-defense, the decision of a class to defend itself. And it is in the context of this decision that self-sacrifice becomes not only possible but in fact necessary, and without any expectation of metaphysical or other recompense.

It is a blindingly self-evident fact, it seems to me, yet one profoundly alien to (post)modern sensibilities. The postmodern Left, you see, wants nothing to do with the "Self." It's all about "the Other", and hence it addresses its audience teary-eyed, lecturing them about such ethical pursuits as "compassion", "solidarity", "empathy" and the like. Its fundamental "ethical" formula is "We are all...X", where X is an empty signifier to be filled by whatever the fad is, from "Berliners" to "Charlie Hebdo", as the recent saccharine neo-imperial campaign had it.

This obsession with "Otherness" in the postmodern Left is not only transparently hypocritical, to the extent that it never requires commitment remotely comparable to that of people like Belogiannis; it also begs the question: what's wrong with being on the side of one's own self? For this, supporting oneself, oneself as member of a class, fighting not for "others", but for one's own rights, is both treated as something of an ethical taboo and dreaded. It is tabooed to the extent that it is interpreted as a bourgeois vice, as the "ethical failure" of an unfeeling bourgeoisie; it is dreaded to the extent that it represents a working-class capacity that inspires fear in the professors of the cult of "Otherness". Indeed, though it is largely funded and promoted by the bourgeoisie itself, the postmodern Left recruits its mass support from a quasi-class--the petty bourgeoisie--that is at once secretly self-interested and incapable of self-defense; this paradoxical combination of shamefaced cynicism and glorified cowardice is its fundamental gestalt, and it is precisely this fusion of vices that professional philosophers have come to elevate to a model "ethics." In contradistinction, communists never appeal to one's capacity for "empathy" or "solidarity" in the abstract; communism plainly asks first for self-respect and self-love for a life recognized as thoroughly material and infinitely vulnerable.

For the proletariat, self-respect and self-love is an ethical act of the highest order; because the proletariat, from the standpoint of capital, is not quite human at all. Except to the degree that it is a commodity, labor power, proletarian life is worthless life from the standpoint of capital. It is life that simply does not matter. A few weeks ago, when a worker was killed on site at the Steelworks of Volos, owned by the same man against whom the historic 9-month strike in Attica was waged, a comrade asked his fellow workers: "the hole where are our colleague lay buried all night had claimed another victim a few years ago. Why did they not fence it? Was it so expensive to fence?" And he answered: "No, it was not. But they wanted to give you a message. That your life is worth nothing. They want you to know that is how they feel."

To love and respect a life everything negates, to love and respect a life the objective organization of society reduces to nothing, to sheer disposability, to learn to protect and defend this life; this is a transcendent ethical act. It is this act that proletarians have learned to perform again and again, outshining every previous example of human heroism, because for the proletarian, heroism is always already implied in the act of coming to see yourself as human in the first plase. Once you see yourself as human, then others are revealed to you in their humanity as well. Or rather, it is only then that you discover what humanity is; it is the negation of the negation of dehumanization, an act of resistance against non-being.

The proletarian understands non-being, s/he has been through the hell of non-being, its valley of sterile and vain tears. That is why s/he never commits an act of transcendence when fighting on the side of the other, in solidarity with the other: the Spanish republican, the Angolan peasant, the Chinese coolie, the strawberry picker in Southern Greece. S/he is not even capable of conceiving that as transcendence, as some kind of "ethical" act; it is as natural as breathing. For you cannot become human (and the human being is that becoming) without becoming involved in the suffering and oppression of all humanity; re-sponsible for it. Learning to defend yourself is in fact the only genuine foundation of real solidarity with others. A working class that defends itself is an ethical force, it is the expression of the universal; which is why it has the absolute and sovereign right to legislate existence for all.
Posted by Αντωνης at 4:05 PM