M. Papadopoulos-Negotiations at the Enemy Camp, Part I 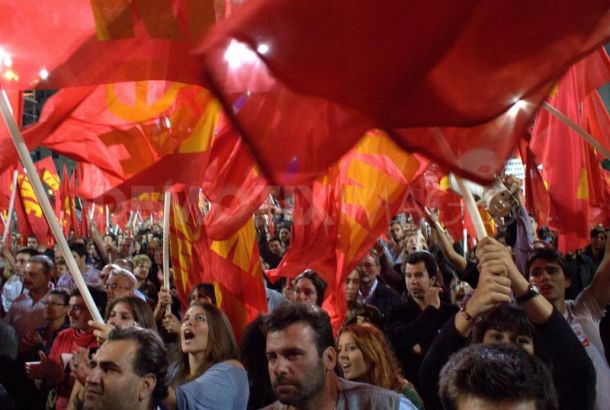 M. Papadopoulos*
Negotiations at the enemy camp
Rizospastis [The Radical]: Organ of the Central Committee of the Communist Party of Greece,
1 February 2015


"Substantial negotiations." This will be the slogan of the post-election trade in hope in the coming months. Both the coalition government of SYRIZA - ANEL and the major bourgeois media are promoting the meeting of the Minister of Finance Yannis Varoufakis with the President of Eurogroup, Jeroen Dijsselbloem, as the starting point of a marathon of negotiations that may lead to better days in Greece and in the EU at large.

The ideological climate which promotes reduced expectations and demands, one which unfortunately prevails today among the wage earners, is exploited to reinforce the illusion that a "tough", "decisive" negotiation might lead to a shift of the bourgeois administration of the economy in the people's interest. There is an attempt to establish the idea that the large losses in the family income of the Greek lower classes during the crisis period are final, and that this is no longer the issue anyway; at the same time, what is projected as the only way out for future popular prosperity is the speedy return to higher rates of capitalist growth, to economic recovery and increased profits for monopoly groups.

To expose the myth of hard bargaining that will allegedly lead to "development for all", wherein both monopolies and wage-earners and the self-employed "win", we must examine that myth's content.

In fact, a deal for the management of the substantial sovereign debt of Greece is part of the broader negotiation between the bourgeoisies of the EU concerning the management of heavily indebted countries as well as the overall future of the Eurozone.

The ruling class in Italy, France and other highly indebted countries wishes to "liberate" more state resources in order to support domestic monopoly groups and their investments, to shield their competitiveness. It seeks to limit the size of government funding that is currently reserved for servicing the national debt and to relax the strict conditions on the elimination of deficits in the annual state budget.

With US support, the Italian and French governments exert pressure on the German government to bear more share in the weight and to accept the joint management of part of the debt of highly indebted Eurozone countries. They are seeking to reduce the gap that keeps getting larger in favor of Germany in the arena of international competition.

At the same time, they are pushing for a greater German contribution to stimulate capitalist development throughout the Eurozone, which has for a long time teetered between recession and sluggish growth.

US support for pressures on the German government concerns the broader struggle for which imperialist center will dominate Europe in the following years. It also concerns the competition between dollar and euro, which are international reserve currencies.

In the context of this struggle, we already saw Draghi's decision for "quantitative easing", totaling 1.1 trillion €. The decision provides that the Eurosystem (the ECB and the central banks of the Eurozone countries) will make monthly purchases of up to 60 billion € of government bonds of euro area countries, using new, "freshly printed" money. However, 80% of purchases will be made by the Central Banks of the member states, thus both reducing the total amount of bonds from each member state and transferring a substantial part of the bankruptcy risk to the different member states. What has been projected for Greece is that bond purchase presupposes a program of monitoring the Greek economy, while the amount of Greek bonds that the Eurosystem can buy is limited to 22 billion €.

In the same direction, there is also the plan for activating the European Strategic Investment Fund, as the European Commission notes with some concern that total investments in the EU are below 2007 levels.

The Greek ruling class supports, as evidenced by the announcement of the Greek Organization for Trade and Industry (S.E.B.), the choice of a certain amount of pressure on the German government.

Finance Minister Varoufakis’s initial proposals for managing Greek debt move in the same direction. They include a package of measures that revolves around freezing country debt obligations for five years, the decrease of interest rates, and the reduction of surplus aims for the annual budget, so as to "liberate" government resources, which will boost capitalist development: an agreement on median-term financing and a commitment to continue reforms in order to ensure the competitiveness of the economy; essentially a new "medium term" Memorandum with a different name.
Posted by Αντωνης at 7:42 AM