Def Min P. Kamenos suggested creating a NATO base in the Aegean-Response of the KKE

Minister of Defense P. Kammenos announced that the SYRIZA-ANEL coalition government will propose the creation of a NATO base in the Aegean, a fact that involves the country even further in the dangerous imperialist plans of the wolf pack.

Speaking at an "Economist" conference, P. Kammenos noted that he will submit this proposal during his upcoming visit to the U.S.

Confirming that the elaboration of this proposal is at an advanced stage, he mentioned that there is a Ministry study that takes into account the Suda, Crete base and NATO needs. However, he did not reveal the island on which the proposed base will operate.

The excuse he gave for the creation of this new attack base in the NATO war machine was that with this base the "Alliance" will have direct knowledge of Turkey's behavior. Of course, through the previous years, the elevation of NATO to the status of an arbiter of Greek-Turkish differences not only did not prevent Turkish provocations, but legitimated Ankarra demands, as NATO does not recognize borders in the Aegean.
Read more »
Posted by Αντωνης at 2:09 PM No comments:

The Tsipras-Juncker joint statement is the harbinger of a new, guillotine-type agreement
P.A.ME

The Tsipras-Juncker joint statement issued today, and relating to labor and social security issues, as well as the presentation of its content as an indication of progress, mean that we are getting closer to new anti-labor and anti-people measures. The joint statement is the harbinger of a new, guillotine-type agreement for the people -- a new "Memorandum."

Just as the "Troika" was rebaptized as "Institutions", so the butchering of whatever labor and popular rights have remained in labor relations and social security is rebaptized "a modern and effective system of collective bargaining" and a "modernization of the pension system."

Do not be fooled! What they announced with the joint statement is the new onslaught that will base itself on laws on which the slaughter of labor and insurance rights was built during all the previous years. It is proved in practice that the bravado of the government concerning alleged "red lines" was thin air!
Read more »
Posted by Αντωνης at 1:49 PM No comments:


President [of the European Commission] Jean-Claude Juncker and Greek Prime Minister Alexis Tsipras had a telephone conversation today. They noted the progress achieved in the last few days in discussions between Greece and its partners on the question of the comprehensive lit of reforms required for the successful completion of the evaluation procedure.

There was special reference to the importance of reforms for the modernization of the pension system, so as to render it fair, fiscally sustainable and effective, in the direction of avoiding the impoverishment of the elderly.

There was also a discussion on the need to have wage-related developments and the institutions of the labor market play a supportive role in the creation of jobs, in competitiveness and in social cohesion. Within this context, there was agreement on the role of a modern and effective system of collective bargaining, which must develop through broad discussion and fulfill the highest European standards.

The constructive talks must continue within the framework of the Brussels Group. Speaking at the event, G. Marinos noted the following:

The CC of the Communist Party of Greece (KKE), thousands of members and friends of the party and the Communist Youth (ΚΝΕ), thousands of workers, express their internationalist solidarity with the CP of Ukraine, with the communist men and women of your country and decisively denounce anticommunism, the wave of persecution that is being organized by the government, by the Ukrainian authorities.

We denounce the anticommunist law 2558 that was recently passed in the Ukrainian parliament and we demand its annulment.
Read more »
Posted by Αντωνης at 1:15 PM No comments:

In a dialogue with Dialogos media, a site associated, among other things, with truth-out.org (and, it unfortunately appears, with Dimitris Kazakis' chauvinist-nationalist and intensely anti-communist groupuscule EPAM), I pointed out that, mysteriously, Michael Nevradakis's otherwise commendable piece on SYRIZA seemed to suffer from the same amnesiac symptoms as The Guardian and Foreign Policy regarding the very existence, for the past 97 years, of a left party in Greece called KKE. Mr. Nevradakis had somewhat surrealistically limited alternatives to SYRIZA that are not Golden Dawn to EPAM, which did not even participate in the 2015 elections, ANTARSYA, which received 0.64% of the vote,  and "Den Plirono" (I won't pay), which also did not participate in the elections, and which is a single-cause movement rather than a party.

The reader can judge on their own the civilities I received as a response to my query on the motivations of such oblivion (I was subsequently blocked as a nuisance), but this piece concerns a particular such civility, which different "left" groupuscules in Greece have been trying to circulate abroad, namely, that in Dialogos' words, the KKE "supports destructive mining activities", and is in fact an ally of Eldorado Gold and its Greek affiliate, Hellenic Gold. I promised a response, which will restrict itself purely to the cataloguing of a number of facts -- as always, substantiated by the relevant documentation. Any more serious engagement has been unfortunately preempted by the very obvious anti-communist animus of the website, though this is an animus whose barely rational character those of us familiar with EPAM's chief, Kazakis, are quite familiar with.

The "legislative work" of the government and the stance of KKE

The legislative adjustments the government has so far submitted to parliament -- above all the two Acts of Legislative Content, one stipulating the looting of available public funds, the other the deletion of up to 100% of fines for tax violations, including those involved in smuggling, of the major corporate groups -- lie within the strict framework of fiscal austerity imposed by the EU and the IMF (i.e, the lenders), so that competitiveness and the profitability of monopoly groups, of big capital, are protected.

Through such legislation, the government maintains the entire anti-labor, anti-popular framework that has been set in place by the Memorandum-related implementation laws of previous governments.

These are legislative adjustments that lag behind even the electoral program announced by SYRIZA in Thessaloniki, hence cutting down even on the few breadcrumbs intended for those living in conditions of extreme poverty. Not only is there no relief for the people, but essentially, the people is told to forget recovering what it has lost.


At the same time, the government continues to refuse to bring to Parliament the agreement it made with the lenders on February 20. It is obvious that on the one hand, it wishes to avoid the image that would be created were New Democracy and the other parties of the bourgeois political system to support the agreement, and on the other, to avoid having the people see the measures in store for them -- measures they 've already dubbed "mild austerity", in the interests of capitalist profit recovery.

(Not) understanding the KKE II

In 2000, four high-profile members of the KKE made a series of public appearances in which they accused the Party leadership of deviations from the party ideology, denounced the Party theses on the way to the 16th conference, and finally publicly called on the so-called "veterans" of the Party to support them.

What followed was a series of letters of response to "Rizospastis" by a large number of Party veterans. In one of these, we read the following:

"Our duty to respond to the plea of the four former comrades, and our right to do so, derive from the elements of our Party identity: 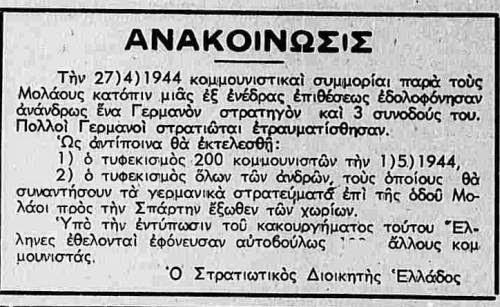 
On 27/4/1944 Communist bandits ambushed and murdered, in unmanly fashion, a German general and three of his entourage in Molaoi, Sparta. Many German soldiers were injured.

In retaliation, we shall:

2. Shoot all the men the German troops encounter on Molaoi, on the way to Sparta, in the surrounding villages.

Under the influence of this crime, Greek volunteers [Nazi collaborators] have willingly murdered 100 more Communists.

The Military Commander of Greece.

Delegation of KKE joins May Day celebration in Kiev

The KKE Delegation will participate in Labor May Day activities organized in Kiev by the CP of Ukraine, a few days after the Parliament ratified the unacceptable law that equates communism and fascism and that forbids communist symbols and the propagation of communist ideology.

Posted by Αντωνης at 4:43 AM No comments:

KKE Portal: On the 40 years since the liberation of Saigon

This year, on April 30, we commemorate the 40th anniversary of the heroic victory of the Vietnamese communists and the people of the country, when American imperialists were forced to evacuate even their Embassy in Saigon, the capital of "South Vietnam", and to withdraw their last troops.

In one of the bloodiest and longest wars, where more than 3 million Vietnamese were killed, while major parts of the country and its infrastructure were destroyed, the forces of the People's Republic of Vietnam, joining forces with the rebels of the revolutionary government in the South, achieved military victory and hence liberated the South and opened the path for the construction of a united country.

This was preceded in September 1945 by the defeat and withdrawal of Japan (which occupied Vietnam) and the declaration of the People's Republic of Vietnam in the North, which was faced with the French colonialists-imperialists' declaration of war and the legendary victory of the Viet Minh in the battle of Dien Bien Phou, under the leadership of Ho Chi Minh and general Võ Nguyên Giáp, in 1954.
Read more »
Posted by Αντωνης at 4:34 AM No comments: